I visited Viet Nam in the summer of 2008 and jotted down some memories. This was written on June 4th, 2008 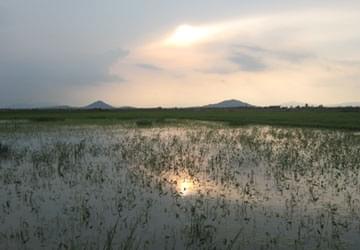 I felt the smooth and squishy earth between my toes. That was last week. Standing in a flooded rice paddy with water just above my ankles, it felt like my childhood has woken up after a long slumber. The air and cold breezes carrying the fragrance of live mud together with the biting sunrays on my face placed me in a rather poetic setting.

Perhaps rice was recently harvested here and the paddies are left nude for the dry season. Then again, I’m only guessing. But this much I know: surrounding me is a vast and seemingly infinite flat land of water-filled rice paddies shimmering with a million suns.

Breezes seemed to only come from one direction. I was sure of this because all the grasses were leaning only one way or at least around where I was standing anyway.

My cousin, who was out herding his family pack of goats, accompanied me to the field. As the joke went, I was there to milk the goats. There was no milking of course and I found out later that they were all male goats.

Much younger than I am, the cousin was an excited one. He was rushing me everywhere on the field whenever he saw small caves believed to be crabs’ dwellings.

Still new to the old feelings, my bare feet inched slowly forward. I looked nervously as the clear water became muddy following each step. The first cave was a small underwater opening located at the rice paddy’s floor.

The cousin motioned me to push my hand in to find the crab. I did this kind of things quite a few times when I was growing up here, so my actions were fluid. But my hand is bigger than thirteen years ago. The cramp feeling, as if my hand can be sucked in or stuck any moment, made the first contact with the dweller a bit chilly.

The sharp needle-like legs and big curvy claws were less than comfortable in soft mud. I quickly pushed my hands below the crab and performed a scoop-up action. In my hand, there was now a layer of mud and above it, my victim struggling hopelessly. As my hand, which was buried up to the elbow, inches out of what felt like a tube of mud, I could feel the sharp crab legs pinching my hand through the layer of mud. It was tingly. I only wish there weren’t any pebbles on the way out. But there were, and they did a number on knuckles.

As my hand and the crab closes to the opening, my cousin cheered in excitement: “Slowly! Slowly! Don’t let it get away!” Finally, it was out. Water rushes the mud out of my palm to show a male crab with its two claws snapping at my fingers. I quickly dropped it into the bucket with a bit of water to join a few my cousins had caught moments ago. For about another thirty minutes, the excitements happened a few more times. Each time was a different personality of crab and each time left a new mark on my hand.

By the end of the adventure, we got over twenty rice paddy crabs. Most were only as big as the size of lime. We left them in a bucket with hope that there would be more the next day—perhaps enough for a pot of “bún riêu”, a Vietnamese vermicelli soup with crabmeat as the key ingredient. 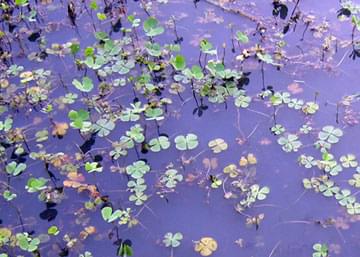 One thing I forgot to mention was the “lucky field” I discovered in one rice paddy. I found big patches of clovers floating in water, all with four leaves. They were clovers, if not, a type of vegetation very close to the clovers’ family. I told myself that I would take a photograph the next time I come back.